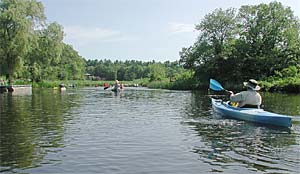 Crew gathered at 7:00am at camp to get the caravan moving. Jeff with friends and Steve drove down that morning. Mike and Joe would meet us at the put in. We set off without waking too many people and were on our way after a quick stop for Java at Dunkin Donuts.

It was about a half hour drive to the put in at Hanover. Mike and Joe were waiting along West Elm for us and hooked on to the end of the caravan. We unloaded the boats and gear and brought everything down to the ramp. It looked quite impressive for a first time trip leader.

Next we had to shuttle the vehicles to the take out in Marshfield. This is where I thought the trouble would start but it went off without a hitch. All drivers went to the take out leaving passengers to watch the gear. We left all but 2 vehicles at the take out and drove back to Hanover where we would leave to 2 cars.

9:00am and ready to launch right on schedule. I breathed a sigh of relief once on the water. The hard part was over and all was well.

It was a great day for a paddle and all were having a good time. One of my favorite spots is the Old Washington Street bridge. It is a stone bridge built in 1904 and is a beautiful sight. Plus as the tide gets a little lower it makes for a nice ripple ride as you pass under it. Today the tide was too high for such a ride. Too bad. We stopped in Pembroke at a rope swing for a quick break. Unfortunately, the swing was gone. On second thought, that was probably a good thing. Sean had been paddling a Sea Eagle inflatable and was having trouble. We decided it would be best if he hooked up with Steve in his Canoe and Joe C towed the Sea Eagle. Looking back I think Sean was tired and just didn't want to paddle. We should have left him in the Sea Eagle. It was tough work for Joe to drag the empty boat and Steve had to do the work of 2 in the back of the canoe.

After the break we hit a few windy spots which allowed for a little workout on the water. We spotted a couple of Marsh birds along the way which made for a couple of nice photos. The group stayed together pretty well with only a couple of SLOW DOWNS!!! shouted out over the 2-way radios. I recall an amusing sight as I turned a corner. Mike was in the front of the aluminum battleship paddling away and there is Joe A sitting back flicking his fishing pole in and out of the water. Chris and Joey would race up to the front of the group and then let everyone catch up. We used them as messengers when the group spread out too far.

We made it to Couch Beach in 2.5 hours. This was a lot quicker than we anticipated. We had originally planned a side trip up Herring Brook in Pembroke but thought the canoes would have trouble meandering up the tiny creek. This shortened out trip quite a bit. Some decided to go back up stream to extend the trip a bit. Once everyone was back we carted the boats up the small hill, brought in the vehicles and loaded up. Most left right away, but some of us stayed to take it all in.

All in all it was a good day. Next time, we will make sure to add the appropriate length to the trip.

Thanks to Pat Traynor for helping with logistics and working with the Town of Marshfield. Also thanks to the folks on Paddling.net for their advice, hints and ideas for putting the trip together.