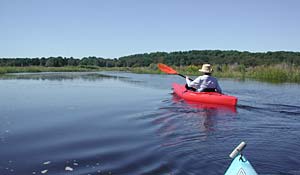 This was my first trip out with my newly constructed home-made yak rack. (I'll probably have to paint it black just for rhyming purposes.) It did me proud on the epic 3-mile trek from my house to Humarock. I'd hoped to try out my new wheeled yak dolly, but since we parked only feet away from the water, it didn't make a lot of sense. Another time...

We met at the Marshfield Town Landing at 10am and launched at approximately 10:20. Ocean high tide was scheduled for 11am, so this gave us a gentle current for the trip upriver. The weather was just slightly better than perfect - mid 70s and an occasional gentle breeze.

At the lower end of the river, there is a considerable number of power boats, but not too many were out on our trip, and the ones that passed us were considerate of our size.

The first interesting point along the voyage was the Bayberry Street Bridge (or the Julian Street Bridge, depending on whether you live in Marshfield or Scituate). The current quickens slightly at this point, allowing for a brief speed boost. Whee.

Soon, we were leaving Humarock and passing the Rexhame Beach area. This would be a decent launching point, as the Rexhame Beach parking lot has ample parking if you don't mind the couple hundred yard carry to the riverbank. We passed several people fishing from the water's edge.

The South River isn't full of surprises around every corner. (And there are no shortages of corners. Pull up them skegs, please.) Vast fields of marshes on each side. They could have named the town after it. (Oh, wait a second...)

One thing that was in no short supply were flocks of Piping Plovers. Many of them were flying low along the surface of the water, briefly dipping their beaks in. Chip and I weren't sure if they were extracting some sort of food or just getting a drink. One thing we were sure about was that they reminded us of Interceptors found on Protoss Carriers (from the Starcraft computer game), except that they don't explode.

We saw an extremely tall breed of marsh grass growing in large clumps at various points. This is something that I hadn't seen anywhere on the North River. Pretty impressive.

Around noon, we passed under the Keville Foot Bridge. This is on the old railroad bed that leads up to the CVS parking lot in Marshfield Center. Not too far beyond that was the Willow Street Bridge.

The tide was heading out at this point, but was barely moving. We had to duck as we passed under the bridge.

One problem was that after we'd passed the Rexhame Beach area, there were absolutely NO places to beach. So at this point, maybe 50 yards from a very busy Rt 139 in Marshfield Center, we simply backed our boats into the muck at the river's edge and had lunch.

After eating, my curiosity got the better of me, so I headed a little further upstream. I knew that there wasn't much further that I'd be able to navigate, but I did get a few hundred extra yards before the river quickly became a rapidly moving stream only a couple feet wide. I couldn't see past the overgrowth, but I guestimated that I might have come to within a hundred yards of Rt 3A and Veteran's Park.

On my way back, I ran into Chip who came up to see what there was to see. The narrowness and heavy overgrowth was a nice (albeit brief) change to the wide open marshlands downriver.

The return trip was largely uneventful - a reverse copy of the ride up. With the tide change, we had a slightly swifter current to help us back. As we reached the home stretch in the Humarock area, we all just put our feet up and let the current take us (at a pretty good clip) much of the way back.

Not the most exciting place to kayak, but a great day out on the water.