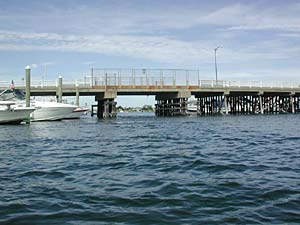 This trip was made possible, because my wife Sue agreed to drop me off in one place and pick me up at another. Such a deal! The tragic thing is that I really *should* have gone on the previous day. It was sunny and crystal clear the entire day with just a hint of wind. On this trip, it was cloudy just about the entire time, and pretty breezy.

Sue dropped me off at the Marshfield town landing in Humarock, and I launched from there. It was about half an hour before high tide, so I was paddling against the current, but it was only slight. Being a weekday, and out of the summer vacation season, there were very few power boats on the trip, which made it nice.

I passed under the Sea Street Bridge and kept to the inland side of the river. This probably made it tougher on me, because the southeasterly wind coming from the ocean would have been blocked by the Humarock cottages on the other side of the river. But I wasn't exactly sure where the creeks were, and I wanted to have a good view as I approached them.

Fairly soon, I came to a rather popular hangout for cormorants, egrets and loons. There appeared to be several young birds there as well. As I approached, they naturally took off, but it was fun to watch.

It was nearly dead high tide, and what were marked as clearly defined creeks on the map now appeared to just be this giant sea with occasional marsh grass growing here and there. I could see Trouant's Island, and I knew that I wanted to go to the left of it, but aside from that, I had no idea where the main creek was.

I saw what appeared to be a very small sandy island on the left. The water went deep behind it, and I optimistically hoped that this water would continue completely around it so that I wouldn't have to go out deeper into the South River. I was mistaken.

The breeze was fairly strong, and in the rather wide-open river, the water was rather choppy. But since I was going primarily with the wind and the waves, this actually worked out ok. However, once I went around this island to the left and ultimately found that it was a dead end, I had to retrace my steps going INTO the wind and waves. Not fun.

But ultimately I managed to get around this annoying little island and found my way to Branch Creek - the primary creek that leads to Macombers ridge. This was a very wide creek - wider than the South River for most of its inland stretch. It was still a little breezy, but with all the marsh grass on either side, the water was fairly calm.

Once the creek ended at Macombers Ridge, the roadway that leads to Trouant's Island, I found that I did not have to portage over the road, as it was flooded deep enough that I could just paddle across it, and actually down it for a stretch before heading onto a tributary of Macombers Creek, which leads past Macombers Island to the North River.

(I get the impression that someone named "Macomber" used to live here. He was probably envious of Bob North and Ralph South who got there first and named the larger rivers.)

My original plan was to sit on the side of the road and have lunch, but since that wasn't an option, I just put up my feet and ate in the boat while the wind and current took me in the right direction.

I finished my lunch just as this tributary emptied into the main creek. I followed this toward the ocean as the map indicated. This made me a little nervous, because it really looked like it was going to dump me right at the mouth - a dangerous place for kayaks.

But at the last minute, it bent hard to the left and emptied me at the Spit. I paddled along the left side of the river as I headed inland. At this point, the surf from the ocean were coming in unimpeded, and I found myself riding in on some small waves. It was swell.

Finally, I could see Herring Brook that leads into the Driftway and I started across the North River. This was the main channel, and the idea of much larger boats coming through at high speed made me a little cautious, so I sprinted the whole way.

This took most of what I had left in me, so I stopped for a rest at the mouth of the creek and gave Sue a call to come get me.

With the wind at my back again, the trip up Herring Brook was a breeze (pun intended). The day's trip wasn't a long one - 2 hours exactly - but a lot of fun. I'd like to do it again on a sunnier day and with some company!