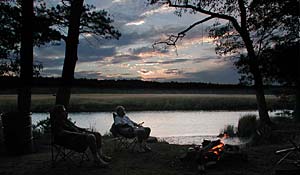 What a day for a paddle! Weather was great.

We all met at the Hanover Canoe Launch at 1:30. I got there early and unloaded mine and Joe's kayaks. Jim showed up with his hand crafted 17ft Chesapeake. I hadn't met Jim but knew of his boat. We chatted a bit and unloaded Selkie. Pat and Joe showed up along with our shuttle commander Sue. Once everything for the boats was unloaded Pat, Sue and I headed over to Couch beach to drop off my truck which was loaded with the camping gear.

We arrived at Couch beach and to our surprise we saw 6-7 tents being set up all over the park area. Apparently, the local boy scout troop was having a camp out too. Could be trouble. Pat went over to chat with the leader as I scouted for a slice of land to set up our camp. The scout leader was very cooperative and we were able to find a nice spot at the end of the park area. We actually had our own small beach, picnic table and trash barrel. Very nice spot. We left the truck there and headed back to Hanover. Sue dropped us off and we were on our way at 2:30. Right on schedule. Jim was not staying over so he left his truck at Hanover and would paddle back after dinner.

The 6 mile paddle to Couch beach was nice and low key. We had a strong tide going with us and very little wind. Jim recorded the coordinates in his GPS along the way to help him get back. As I write this, I don't know if he made it. Hopefully, he didn't paddle to Canada. The old Washington St. Bridge in Pembroke allowed for a little excitement with a fast current. We made it to Couch beach in an hour and 45 minutes. Pretty good clip for us. As we approached the beach we could see my truck and Pat told Jim that's where we are camping. Jim's jaw dropped. He didn't know you could drive right into the park and leave your vehicle. If he knew he would have left his truck there too.

The scouts were is full swing as we arrived at our campsite. They were playing volleyball and just running around having a good time. We unloaded the truck and started setting up the cooking equipment and tents. Jim got a fire going to cook dinner. Jim was giving us a lot of good natured crap about our not so low impact camping style. This was our first overnighter in the kayaks. I think he expected everything to be in the kayaks. It's tough to get my pillow in my kayak with everything else. Don't worry Jim, we are working our way to camping out of the kayak.

Pat rigged up a grill set up over the fire to cook dinner. Steak tip, sausages and baked beans. Ooh Yeah! Dinner was great while sitting around the fire and chatting. I found out that Jim almost married my cousin 20+ years ago. Small world huh. Our campsite was in a perfect spot to view the sunset. I am sure Pat will insert a nice photo here. Jim made himself a cup of coffee for his paddle back to Hanover and we bid him farewell.

It was a beautiful night for the end of September. No sweatshirts needed. Joe, Pat and I sat around the fire enjoying the night and each others company. One thing we know how to do is sit around a campfire and enjoy each others company. I almost forgot the huge owl that came by a few times. I am not sure what he was looking for but it was quite a sight against the bright moonlit sky.

We decided to call it a night around midnight and headed toward our tents. Joe and Pat were in Joe's tent sans rainfly. I had my own 2 man dome tent. Unfortunately, it rained just enough to wake up Joe. I had a blue tarp in my truck which worked fine as a temporary rainfly. I think the rain stopped as soon as he had it up.

We all got up around 6:30. What a nice morning. We got the fire going again and Pat started the coffee. Around 8:00 I started chopping the onions and peppers for the homefries I was going to make from the potatoes we cooked by the fire last night. We ate a hearty breakfast of fried eggs, homefries and corned beef hash. Good stuff. We had to wait for the tide before we could launch so we took our time breaking camp.

Our plan was to paddle against the tide as it rose and eventually catch the change along the way. The boy scouts were heading back to Hanover with the incoming morning tide and watching them flow by us at a crisp pace got us worried. The tide looked a lot stronger than anticipated. Joe and I put our kayaks in and tested it out. It would be a lot of work to paddle against this tide. We decided to wait it out a little more. While we were sitting there, Pat came up with plan B. We could load the boats on the truck and drive down to Damon's point and put in there. It would be close to high tide there and we would catch the changing tide sooner. We doused the fire, loaded up the boats and headed out.

Not so fast. As we were driving out of the park, a cruiser was driving in. He stopped in our path and got out of the car. Not usually a good thing. He asked me for my license which was in my wallet in the bottom of my drybag which buried in the truck somewhere. While I was fishing for my license, he asked if we had a permit, hoping we didn't of course. Luckily we had all the appropriate paperwork and were quickly on our way.

The launch from Damon's point went well. We would paddle to the spit and then up some creeks to the South River to the Marina. We caught some nice wake and chop on the way to the spit. Fun stuff. We took a break at the spit and walked around a bit. Pretty quiet day on the spit. More kayaks than motor boats today. We had some trouble finding the right creek to get us to the South river. They don't always look like they do on the map. We eventually got there and could see the bridge by the take out. After not sleeping too much and fighting the wind and current, that bridge looked very far away. I think we had all had enough for the day and wanted to get to the bar for pizza and football. We finally made it to the takeout and Sue showed up soon after. We loaded the boats and headed back to my truck at Damon's point.

What a great weekend!. Thanks to Sue for carting us around. It made life a whole lot easier. I hear Jim made it back OK after a run in with a bass and some other misadventures. Look forward to reading about his ordeal.

[ Jim's report - Return to Hanover in the dark ]