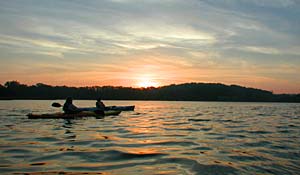 This trip kind of came up out of the blue. I had been seeing my calendar fill up more and more since school started and have been going through paddling withdrawals since our campout. While reviewing the tide charts for a possible future paddle I noticed that Saturday was an early 8:30am high tide. The wheels started turning. If I can drag myself out of bed at 6:00, I can get a few hours in before my daughter's soccer game. I decided to go for it. I let Pat know figuring I would be going solo due to the hour of the day. Silly me, before I knew it there were 4 of us and I was the last one to show up. That's because I live the closest. It always works out that way.

After a getting my much deserved abuse for being the last arrival, a quick hello and introduction to Bea, we were in the water. The launch site was very accommodating. I'll try to give more details in the Paddling Spots section. We headed inland with the tide under the 3A bridge as the sun was coming up. It was an awesome October morning. The leaves have just started turning colors and we got a pretty nice sunrise to start out. As we paddled further inland, we saw more wildlife. Cormorants and Seagulls aplenty. A couple of Osprey and other smaller birds. I think a lot of the water creatures are getting ready for winter. The area on the Hingham side of the river was owned and used by the navy during World War 2. It was a ammunition depot. Some of the old buildings still stand. It is now part of Bare Cove Park. The Weymouth side is Great Esker Park.

As we paddled further into Weymouth the river narrowed. We passed the old incinerator and other old buildings on our way to Jackson Square. The Cormorants were playful and abundant the whole way in. They would take off and fly within 5-6 feet of us. Very cool site. One of the highlights for me was paddling through the round tunnel under one of the railroad bridges. It felt like the Pirates of the Caribbean ride at Disney World. Jim went through the tunnel with one of the Cormorants. Brave man. This was near the end of the line. We could hear the rushing water of the Herring ladder ahead. We paddled up a few hundred years to see what was up. Pat had one of the Cormorants swimming next to him for a while. It was like he had an escort. The bird flew ahead towards the whooshing water as if to taunt us and dare us to continue. We decided to turn back after Jim made a cup of coffee in his Kayak. Next time I swear he will pull a beer tap from one of his hatches. He never ceases to amaze me.

On the way back Pat, Bea and I decided to explore a side tributary. We bid Jim farewell at this point. He was on a tight schedule and had to head back. I am sure we will paddle together again. Pat took the lead as we headed into the tributary. This one narrowed fairly quickly but we moved on. Pat reached the end and turnaround. I had some trouble turning around but finally made it. Bea was smart enough stay back a bit and had no trouble turning. We all made it out and headed back taking our time, enjoying the scenery and chatting along the way. I have learned 2 things during my last 2 paddling trips. Don't paddle with JIm in the dark and don't follow Pat down ever shrinking estuaries, at least until he gets a bigger boat.

The rest of the world had awoken as we returned. The parks had more walking activity and running dogs. Boats were moving about the yacht club.

It was a fairly short paddle but it did the job of feeding my fix. You can't beat a good paddle with good company. Thanks for getting up before dawn with me guys.