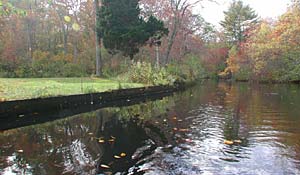 The plan was to go on Sunday. But the Patriots would be going for their 20th in a row, and Saturday was an absolutely gorgeous day. The only thing was that it was rather windy, but I figured that this was a pretty enclosed river, and the wind shouldn't be that much of a factor. So I made an executive decision and went on Saturday.

Sue wanted to do some shopping and asked if she could drop me off. This actually worked out great, because I wanted to start up beyond where the tidal waters reached, and that would make it a one-way trip. Tricky if you've only got one car.

I launched just downstream from where Elm Street crosses the river. For those who are familiar with the area, this is the quaint bridge that is only wide enough for one lane and has to be regulated by a traffic signal. There is a herring ladder here and some sort of water dept. facility.

Launching was a little tricky. Along the shoreline, there is a cut granite wall that is a couple feet above the river itself. Fortunately, there was this tiny dot of land sticking up, about 8" square. I tied a rope to my kayak and had Sue keep it in place while I lowered myself into it. Sue handed me the rope and I was on my way.

The water was moving swiftly here and it was kind of a fun ride. There were some very shallow areas, and I hit a few submerged boulders along the way. We'll need to have Jim take Selkie through this area to map out the dangerous spots. After about 50 feet, the river deepened a little and I didn't have any more trouble.

Then, about 8 feet in front of me, a Great Blue Heron flew out of the riverbank, scaring the living crap out of me. Apparently I did the same to it, and I was lucky not to be covered in about a quart of Heron feces. This was the closest I'd ever been to one of these, and it was an impressive sight! Now that things had calmed down, I figured I should start taking photos of the area with the foliage.

That's when this cloud came out of nowhere and blocked out the sun. I'd told Sue that she could pick me up in two hours. This is far longer than my trip would take, but I wanted to give her sufficient time, and I figured I could find enough things to do along the way to stretch out the trip. So with no reason to hurry, I pulled into a little side area, grabbed onto a bush branch and waited out the cloud.

It was so nice and peaceful there. I looked up toward the sun and saw that this little cloud was followed close behind by its mother. And right behind her was the rest of the entire freakin' cloud family. Now I'm getting a little bored, and realizing that my luck hasn't changed, I pushed off and continued on my trip.

This really is a nice little ride. Not a very wide river — there were places only about 8' across. But it bends a lot, and the landscape changes. I went from dense woods to houses with lawns that extended right into the river. The current was fairly swift, and no paddling was really necessary. Basically, it was just steering.

The rest of the trip was largely uneventful. I passed under the Rt 3A bridge, around a few more bends and then under the train bridge.

Soon after that, I was approaching the Rt 3 overpass, and I saw a tributary that went under a small bridge, and with still a lot of time before Sue would pick me up, I decided to check it out. And going under bridges is always great fun.

After travelling with such a helpful current for so long, it was nice to have to do a little work to paddle against a current for a bit. This tributary turned out to be relatively short, but interesting none-the-less. On both sides, it was flanked by that tall grass that's so big with rich older women - they buy it for ten bucks a bundle at the hoity-toity craft shops.

Ultimately, I got to the end of the kayak-navigable portion of the stream. It turned into a babbling brook and a cement-and-metal bridge had collapsed into it. So I turned around and headed back.

About halfway back, I went up a tributary off of this tributary — not terribly long. It ended at Rt 3 where water was gushing through some sort of port in the side of the highway. Never did find out where it came from.

So I headed back toward the Jones River. About this time, I started checking out the sky again. This family of clouds was starting to look serious, and not just as a sun blocker. The sky was getting very dark and threatening. What did that weatherman say about possible passing showers? It didn't seem all that possible earlier when the sky was blue from horizon to horizon.

I'm getting a little worried now, because although I could probably get to the pickup spot fairly quickly with the wind and current at my back, my ride is still about 90 minutes off. I remembered my days riding a motorcycle and I started thinking that maybe I could get under the Rt 3 bridge and paddle in place until the rain passes. Yeah, that sounded like great fun.

But when I got to the bridge, there was this pier-like structure, and I could have simply parked myself next to it if I needed to. But apparently the sky was just screwin' with me, and the dark clouds passed without incident.

From here on, it started to look very much like the North and South rivers, with lots of marsh grass and large looping curves. Ultimately, I got to the parking lot where I'd be meeting Sue. Our agreed-upon pickup time was still an hour off, so I did a little touring. I paddled out to a point on the bay where I'd get a good view out toward the ocean. I could see all of Saquish and the bend in the land where I'd have to go to reach the Powder Point Bridge.

The wind was heading straight in that direction, and it probably would have been a pretty easy ride. But I didn't have any way to tell Sue, so I turned around and headed back toward the pickup area.

Omygod. That was some kind of wind. I had to crank long and hard to overcome it. But I finally made it back, and there was Sue, a half hour early. Good anticipation, Sue. We loaded up and headed home.