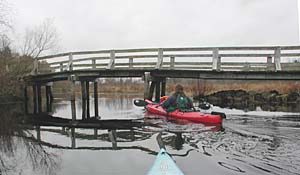 Carol's directions to the put-in were perfect. And they would have been even more helpful if I'd remembered to bring them with me. So Chip and I made it as far as the river itself and drove around for 10 minutes through Bradley Palmer State Park before admitting that we didn't have a clue. I called my wife Sue on the cell and had her read me the directions (which were still sitting on top of the printer).

We met Carol and Lisa at the put-in only a few minutes late. After introductions and unloading, we were on our way. This was an up 'n' back trip. We had to go against the current on the way up, but with few minor exceptions, it was mild and made for a leisurely paddle.

We really deserved better weather. It wasn't all that bad — just a little drizzle here and there — but there was still substantial foliage, and it's truly a beautiful river. The heavy cloudiness muted the colors and made photography a little tricky. And although it was a windy day, we were pretty well sheltered the whole way.

We passed what appeared to be the remnants of and old stone bridge. Lisa and Carol pointed out many of the interesting landmarks along the way. They'd obviously spend some serious time on this river! We saw beaver houses and the results of their hard work along the riverside.

The first bridge we went under was where Asbury Street crosses. The second one was far more interesting — an ancient-looking horse bridge that is still very much in use. Either age has heavily warped it, or the bridge builder had an artistic streak in him.

Carol informed us that this is the uprooted tree capitol that we were paddling through. There were areas where it looked like we were passing through a swamp with the trees growing out of the middle of the river. Very cool... We annoyed several duck couples along the way. They should probably be heading south anyway. Maybe this was the push they needed.

There were a few locations where the river passage was narrowed and running swiftly — we had to paddle hard and accurately to negotiate the run. Since my kayak tracks like a Water World bumper boat, I caused the first traffic jam when I couldn't stay straight up a thin passage.

We stopped at Colt Island, stretched our legs and had some refreshments. There's a terrific campfire spot on a hill here. We really should have brought several armloads of wood — one of the downsides of a kayak vs. canoe. This was the only time that we were cold during the trip. Unprotected by our boats, the wind cut through us. Next time, fire and some hot stew or something.

The trip back was great with the current helping us along. The challenging straights that we had to fight on the way up were just fun rides now. Just before we made it back to the put-in a deer crashed through the brush right next to us. Of course, I was looking the other way and missed it.

A great trip, and the weather didn't dampen anything. Looking forward to coming back next year, but Lisa and Carol agreed to stop down to our neck of the woods once we get back into paddling season again.