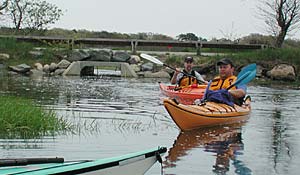 The weather was somewhat unsettling all weekend. The four of us decided to make a go of it as we have seemed to slip the evil eye of Mother Nature, at least for the moment. We all met at the Xmas tree shop just over the bridge in Sandwich. We introduced ourselves to Steven, our trip leader for the day, and were on our way to the put in. 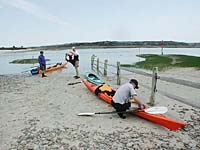 This was one of the nicest launch spots I have seen in a while. Nice, calm sandy beach. We set off like the explorers before us looking for a shortcut to Barnstable Harbor. Also like many explorers before us, we failed. Although we had a heck of a time in doing so.

We started our journey inland enjoying the many birds and beautiful houses lining the landscape. We came upon some young guys fishing out of a canoe and a pram. It was a little amusing watching the kids in the pram paddling it like a canoe. As we were winding our way through the creek we saw more birds. A black-headed booby gull (I made that up, Steven had a better name but I can't remember it) was feeding its young, an osprey perched on his nesting pole and a flock of seagulls (not the 80's band) on the marsh. 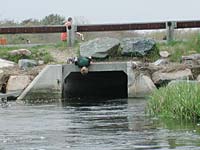 The confidence in our esteemed leader waned at each fork in the river. He would call out heads or tails or just say "what do you guys think?". But we paddled on in search of the elusive Barnstable Harbor. As the creek thinned out we came to another crossroad (Another music reference), literally a road crossing our path with a small bridge over the creek. They called it a bridge. I would call it a sewer tube. I went with the bridge monicker just to convince myself to get through it. We all made it through with minimal effort, although Steven being the only non-ewok had a little more trouble. 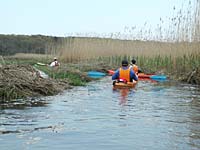 Now the creek is getting narrower and more winding with each stroke. We finally came to another fork with two very small choices. At this point we decided to turn back while there was enough creek to turn around in and headed back to the pipe from hell. Sorry, I mean quaint bridge. Since the tide was still rising, the bridge had even less headroom than before. Steven went first as any good leader would and had a lot of trouble. His chin was a hair away from the bridge and his boat was even closer to taking on water because he had to push it down to get face room. After that, Nelson and I decided to portage over the road. Pat on the other hand thought he was at a ride at Wet and Wild and went into the tube of death. Being an ewok, he had less trouble than Steven. Nelson and I put back in the water and we were on our way. We approached the original fork and decided to go with tails this time and paddled into the new creek. This one ended pretty quickly so we turned and headed back to the launch. 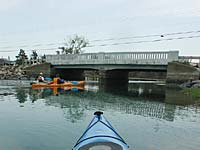 We ran into some other paddlers on the way back as well as another osprey nest and witness parents feeding the young ones. Very cool. As we continued back the rain started sprinkling on us. Mother Nature caught on to the Lucy ruse and finally caught up with us. The rain wasn't bad so we didn't feel rushed. The tide was so high on our return we could almost paddle right to our parked cars. We loaded up the boats and chatted about the trip while eating lunch and enjoying our PPR (post paddle refreshment).

Thanks to all for showing up and to Steven for planning and leading the trip. I know we gave Steven some good natured ribbing for his leadership skills but it was a very good day with lots of adventures. I look forward to paddling with you all again.