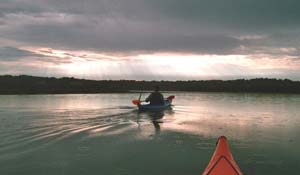 There's an old saying in these parts, "If you don't like the weather in New England... just wait a minute." Well in this case it was more like an hour but it was definitely well worth the wait.

Our day started at the Star Market parking lot in Marshfield. Everyone arrived early except for Todd who said he'd catch up with us at the put-n. After the introductions and a bit of small talk we headed on our way to Powder Point at Duxbury Bay. For the most part the sky was blue but to the West the clouds were beginning to darken. 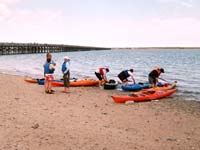 When we arrived at Powder Point the wind had picked up a bit and there was a little chop on the water, but the sky was still clear and the temperature agreeable. We unloaded our yaks, stowed our gear and were in the water in little time. Todd showed up just in time to launch with the rest of us. The waves tossed us around a bit, but after the quiet waters of the North River and Scorton's Creek this was a little exciting. We picked out a "fishing line free" spot to pass under the bridge and were on our way. The plan for the day was to paddle North from Powder Point, under the bridge and follow the incoming tide to explore Duxbury's Back River. After we'd had our fill of the river we would head back to the put-in and decided if we wanted to continue along the Northern shoreline of Duxbury Bay, down Bluefish River to the Washington St. Bridge. But today Mother Nature had other plans for us.

As soon as we had cleared the bridge the weather behind us looked considerably different from the weather before us. I guess you could say it was like night and day. As a matter of fact the weather was beautiful everywhere you looked except for in the direction we were headed. We all began looking at each other for suggestions until a thin streak of lightening shot out of the sky making our decision a little easier. We decided to pull into the beach on the other side of the bridge and wait to see what developed. Pat, Chip and Ron paddled around just off the shore for a while until the Duxbury Harbor Patrol came by and ordered them onto the beach until the storm had passed. 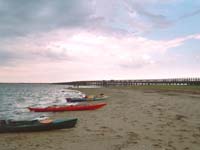 So there we were, not 500 yards from where we started, stranded like the crew of Gilligan's Island. We even had our own Ginger and Maryann. Since some of us had never met before, we took this opportunity to get to know one another while varying layers of clothing to the constantly changing elements. Being the seasoned trip leader that I am I decided to take charge. "Ok," I said to everyone. "When that bright spot in the sky reaches the yellow boat, we'll head back out." That seemed to give everybody something to hope for but unfortunately the storm front didn't exactly cooperate with us, and the bright spot never reached the yellow boat. The sky just grew darker and meaner. It was as if this storm had developed to deliberately prevent us from having a good time. 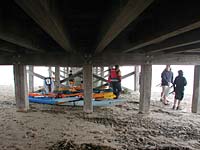 Todd walked back under the bridge to get a coat from his car and when he returned told us that the weather was still much better on the Bay side of the bridge and that maybe we should paddle there instead. Not knowing whether or not the Harbor Patrol would allow us to paddle back from our current location, we finally decided to carry our boats back to the bridge and see how things looked on the other side. But no sooner had the last boat been set down under the bridge when the sky opened up and a deafening blast of thunder forced us even further under the protective canopy of the Powder Point Bridge. The wind picked up again and now it was getting colder. At this point Janet, Bea and Todd decided it was time to call it a day. We helped them get their boats back to their cars but deep down we knew they were making a mistake (us seafaring men know these kinds of things). Those of us that remained were pretty determined to see that the day was not wasted and watched the sky slowly begin to brighten over the next fifteen or twenty minutes. The dark clouds were moving farther East and by 5:20 we were on the water once again and back on course.

The cloud formations were fantastic and I've never experienced anything quite like this before. The sky was still very ominous and the cloud cover low, making the world feel smaller. In the distance, rays of filtered sunlight poured from above as if a peace offering from the heavens. Could this still be the same place we were twenty minutes ago? I thought to myself.

We paddled NorthWest intending to find the Duck Hill River, one of at least 3 rivers that branch off of the Back River. With it now close to high tide and being so low to the water, it was difficult to find any opening that looked remotely close to the one on the chart I brought (where was Chip's GPS when you needed it). I ventured down a narrow waterway while the others waited, but after a couple of tight turns it felt too much like Scorton's Creek so I decided this wasn't the right way (I was at least 100% certain that it wouldn't take me to Barnstable Harbor). We took the next most logical route, which seemed to be the right direction which turned out to be an extremely enjoyable paddle. There was lots of bird life, the water was calm and with the majestic cloud cover overhead, I felt like I was part of one of those paintings that guy with the afro used to paint on Channel 2 years ago. Remember him? Needless to say the four of us were thoroughly enjoying ourselves. 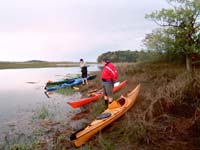 After winding our way to the narrower regions of the river, past many beautiful homes, an old duck blind and what looked to be some sort of a farm stand (strange place for a farm stand), we turned and began to make our way back. By now we all needed to stretch our legs and eat something so we took a snack break at the marshy knoll where the duck blind was. Pat perched himself in the arm of a tree and enjoyed his snack while Chip, Ron and I did the same at the edge of the river, all the while discussing how great this day had turned out.

Back in our boats we continued our paddle towards home. The river was now as smooth as glass and we took in every inch of our peaceful surroundings. For a while all you could hear was the sound of our paddles slicing through the water and the chatter of marsh birds. The setting sun behind us shone brightly on Powder Point Bridge making it look like a band of silver across the water. 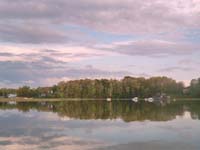 Side by side we paddled on when Chip broke the silence. "This reminds me of and old western, you know, like four horsemen riding into town. We all agreed and I began to hum the tune "Ghost Rider's in the Sky" (or in this case Wild Turkeys in the Sky) as we paddled past the bridge to the take-out.

I don't think any of us wanted the day to end but the sun was almost set and we had wives and families to get back to (oh and dogs, sorry Pat). I also find it ironic that the one thing that almost ruined our day was the same thing that put this trip above the rest. Pat had made a comment as we were paddling back, that this had been the most scenic paddle he's been on so far and although I only have two others to compare it to, I'd have to agree with him. Thanks for stickin' it out guys; it was great paddling with you.