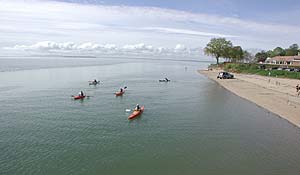 Our second visit to the Duxbury Back River was not near as interesting as our first but the day improved significantly when we decided to paddle back to the Bay, down the Bluefish River to the Washington St. Bridge. This was a perfect day for paddling and a welcome change from the weather we've been having. 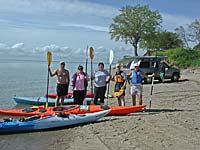 I arrived at the Powder Point put-in just before 9 AM to find Todd's boat already geared up and ready to go. I pulled my truck onto the beach to unload when Steven showed up on his bike to see us off. In a matter of minutes Bea arrived followed by Lynn and Wendy who decided to join us at the last minute. And last but by no means least, Pat stopped by to wish us good luck on our trip and to a take a few Bon Voyage pictures for the message board.

We set off heading North under the bridge with no fishing lines to contend with this time. The plan was to find the mouth of Little Wood Island River, which is the middle of the 3 rivers that branch off of the Back River. 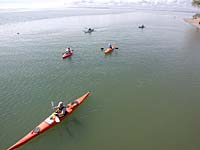 I looked at the chart to see if things made more sense (than on our first visit) now that we were an hour before high tide. It was a little easier to pick out different landmarks on the chart however we needed to get closer to be certain, so we set our sites on an Osprey nest in the distance. We went at a leisurely pace while people got acquainted. Upon reaching the nest we found two Ospreys protecting their young. It then became clearer that we should have paddled a bit more Northwest for the Little Wood Island River and that we were now heading into the Great Wood Island River. Rather than loosing time by backtracking, we stayed on this course to see where it took us and soon found out that it took us pretty much nowhere. The GWIR just meandered back and forth until it narrowed to the point of disinterest.

I suggested that we turn and head back and if we made good time we could paddle on the bay side for awhile and check out the Washington St. Bridge. All were in agreement and we were soon headed in the opposite direction. By the time we had made it to the Back River, the wind had picked up a bit and was in our faces. The Capella likes being in the wind and you can tell by the way it handles, it practically leaps forward. A motor boat pulling a somewhat acrobatic water skier flew by giving us a show and few waves to ride, then disappeared in the direction it came. 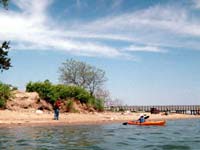 We reached Powder Point by 11:00 with an hour of paddling time left before many of us had to be other places. The bay looked awesome and it felt good to be on more open water. As we paddled past the beach where we put-in, Bea was having some difficulty making forward progress. No one else seemed to be having a problem, even Lynn and Wendy in their rec boats. It seems the fishermen on the beach were out for something a little different today and Bea had taken their bait hook, line and sinker. The fisherman was trying to reel her in but she put up a great fight and was able to break free. I always thought Bea was a great catch but this was ridiculous. 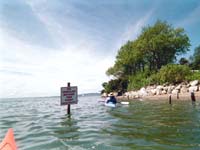 So off we went along the coast past King Caesars Road into the Bluefish River. I didn't know how long it would take us to get there and back and was chugging along at a steady pace. Realizing I was getting ahead of the pack, I slowed down to let them catch up and watched a pair of catboats trying to catch a tailwind across the bay. Off again I paddled around a point of land and soon lost sight of them. As I paddled past a boat named Fast Track, I turned but they still hadn't made it around. I stopped and waited again. When they didn't appear after a couple of minutes and I could see no paddles moving anywhere, I turned the Capella around and paddled back. There I found them doing a bit more yakin' with their mouths than with their yaks. "Is everybody alright?" I asked. "Yes." They replied, "Bea needed to make a call on her cell." "I don't know about you guys, but I need to be back by twelve. I have a lot to do this afternoon." I said to them. They all agreed they had things to do as well and we were on our way again and at a more suitable pace. 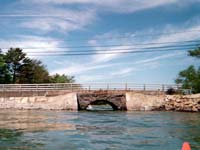 We rounded the last bend in this part of the river to find the Washington St. Bridge. I think we all like paddling under bridges, especially when they are quaint like this one was. It looked very inviting. On the other side we found a quiet little cove that brought you back to days gone by and less stressful times. We floated there for a while and took it all in before heading for home. Unfortunately my camera had already run out of film before I could take a picture here... sorry.

On the way back ColonialSinger serenaded us beautifully with an olde sea tune which was followed up by Todd's rendition of Brandy. Todd doesn't have quite the same sound as Lynn does but I'll give him and A for effort (but don't quit your day job Todd). As we paddled out of Bluefish River and back into the bay on the last leg of our journey, I couldn't help but marvel at how absolutely beautiful the day was with the bright sun and the warm breezes. These were without a doubt the ideal paddling conditions.

We made it back to Powder Point in perfect time. Bea got a few peculiar looks from the fishermen on the beach as we carried her boat up to the car, but I'm sure they'll all be telling all their friends about the "one the got away".

With all our boats back on our cars, we thanked each other for a great trip. It was also nice to get the chance to meet yet another Wild Turkey. But there's still lot's of Duxbury Bay left to explore and I look forward to doing it with you all soon.