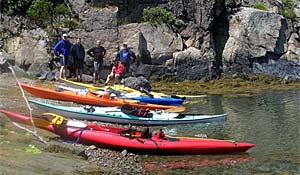 Photos by Todd Prentice and Steve Roberts
Click on any image for an enlargement.

This was to be my first trip to Boston harbor islands, a goal I had set for myself since I bought my yak last fall. I had been in Hingham Harbor (H.H.) twice before, once last summer with EMS on a Kayaking I adventure and another by myself later in the year. (Solo tripping is not recommended until you have practiced self recovery-last year I was young and foolish, this year older and wiser-I hope). 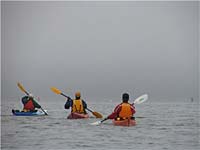 In Marshfield, the day had started cool and foggy when I was loading my yak at 6 AM. My drive to H.H. exhibited cooler temperatures and when I arrived at the Harbor I observed more fog than had been in Marshfield. Steve reported the wind was out of the North East and we might face some chop.

The 2 newest Turkeys, Craig Paton and Dave Keefer, both from Quincy, arrived shortly before 7 AM and everyone greeted each other and prepared to leave. The temperatures were in the low 50's and we anticipated high tide at 8:45. I was layered with shorts, a long sleeve t-shirt made of that moisture wicking material, a fleece pullover and a wind breaker. Combined with my spray skirt, I was warm enough.

We discussed our plan of action and we all agreed that we would cross the H.H. channel, pass H.H. islands Button, Sarah, Ragged and Langley (personal note-last year when I was with EMS, getting to these islands was a thrill for me). Then we skirted World's End with our first destination either Bumpkin or the Weir River. Steve had told us of the abundance of wildlife on the Weir and we all wanted to experience that, but we wanted to hit the islands while the pleasure boaters were docked and moored.

So we headed for Bumpkin, just off of Sunset Point of Hull, also referred to as White Head Flats. We were still short of high tide when Craig directed us to the west side of Bumpkin where a dock and a shelter were seen through the fog. We watched a larger ship staging for the entrance to the Fore River Bridge off to the north.

We paddled around the dock and went ashore landing our yaks above the high tide line. A small climb over some rocks got us up to the dock where a sign told us of the history and geology of Bumpkin. A ranger station (a euphemism for a dirty rundown bunker) was immediately to the right and Craig had told us this was where the rangers would greet campers and give information about the islands to hikers. The station had yet to open and we all imagined that the larger islands were manned first and the smaller islands would be manned later.

Trails led up through the woods to more established yet overgrown trails. We traveled west toward the campgrounds and picnic areas, and found several solar paneled outhouses. Craig had told us that later this summer, youth will come in armed with gasoline powered weed whackers and clear the trails and campgrounds. Craig has been to a number of Harbor Islands and is a good resource for any f these trips.

Dave, Craig and I hiked to the ruins of a children's hospital, while Nelson and Steve checked to see if our yaks were still safe above high tide. Other ruins on the island include a farmhouse and a mess hall for WWI soldiers, but we left them for another day.

Bumpkin has high enough elevation to view outer harbor islands, but the fog limited our view to Paddocks further east and Sheep to our North East. These 2 islands are just a short distance from Bumpkin and could easily be included in future trips. Pemberton Point off Hull (where the windmill is) provides easy access to Paddocks, but beware of the Gut where the channel narrows and the current can be strong.

We decided to continue over to Grape and Slate, instead of back tracking to the Weir River because we wanted to cross the channel when traffic was at a minimum. We crossed the channel as a group to heighten our visibility to other boaters and we observed a lobster boat dropping its traps to our east as we crossed.

We headed directly to the west side of Grape, aiming for some boats on the rocky beach. A lot of sea grass surrounded the island and it was interesting to watch the bottom pass by as we neared the island.

The beach was crowded with a dozen or so sailboats and a flag told us that they belonged to the Boy Scouts of Canton. We walked the cobbles counterclockwise around the island to its eastern shore, not seeing any paths leading to the interior of the island. We used my binoculars to view the Church and barracks on Paddocks Island. Again, Craig said that you can spend a day on paddocks just touring around. Nantucket it ain't, but I'm not going to paddle to Nantucket anytime soon. This walk gave us a chance to rest and chat, and talk of future trips. Grape reportedly has a lot of birds (heard but unseen) and skunks (unseen and unsmelled) due to the abundance of fruit and berries. Grape also has history from the Revolutionary war. Apparently some Tories were gathering hay for their horses and were chased off the island by the good guys.

Heading back to our yaks, we met up with the Scouts (no longer just boysare members) and we were asked to help them carry one larger sail boat to the water with the leaders and scouts. They were apparently camping around the corner to the north, but we didn't venture in that direction but it looked better than the direction we had walked.

We headed back out into the water to circle Slate Island counterclockwise, deciding to forego a stop on the island for a chance on the Weir River. Slate is appropriately named due to the rock structure. Most of the Harbor islands are Drumlins, deposits of glacial till left from the last ice age. Slate from this island was used for tombstones of the revolutionary dead.

The fog was lifting more as the day progressed, and I had removed the fleece layer and was down to the wind breaker and t-shirt. All day long I was waiting for some chop, but none was found. Nelson had commented to me that it was invigorating to have some waves on his trip to Plymouth and I was looking forward to that. The biggest waves I had experienced so far were some in Duxbury Harbor, when we were on the South side of Powder Point Bridge 2 weeks ago with the Turkeys. I was a little hesitant when water was breaking over my bow, but quickly felt secure that I could handle it. This trip was to build on my confidence in handling larger waves, but it didn't happen.

This was a good first rip to Boston Harbor islands. Bumpkin, Slate, Grape, Paddock, and Sheep are sheltered from any winds from the south and south west due to Hull Peninsula. As we headed to the Weir River, we noticed that the wind had changed and was out of the South West. I'll have to wait for larger swells, but I can cross Boston Harbor Islands off my to-do list. I imagine that if the wind was still out of the North-Northeast, I would have experienced larger waves. 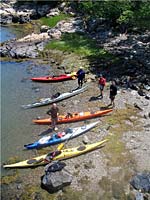 The chancel cross toward the Weir was quiet, and as we headed into the river, the sun finally broke out and the day became beautiful. To our starboard side some yakkers were fishing the grasses off of World's End and to our port were Hull and pretty beach houses dotted the shore. We headed to a small beach are on World's End first drumlin, below Planter's Hill. A rock outcropping proved no match for Steve's climbing skills and he took some pictures from that vantage point. We snacked there and discussed traveling further up the river, but decided that chores back home took precedence.

Steve mentioned that the high tide further up the river would be a good place to play some day. The river narrows so that when the water flows through, it can be an adventure. We put that on our list for further exploration along with Paddocks and further exploration of Bumpkin when we can come back with other Turkeys.

The day ended beautifully, I was overdressed in just my t-shirt going back to the put in. I was tired, and later that day had a few shoulder and neck pains. It was a good day. I enjoyed paddling with Nelson, Steve, Craig and Dave. We discussed further Boston Harbor Island trips and made many plans. We also discussed using the beach area for skill practice some day.

We wait until the day we can take our fellow Turkeys on an adventure. 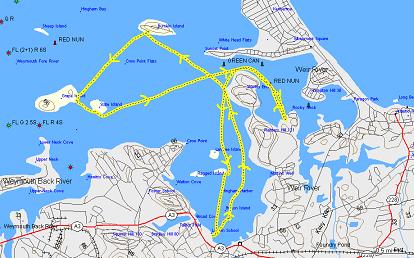