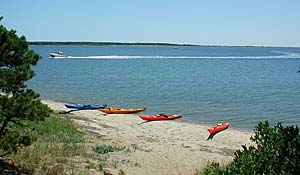 Photos by Pat Traynor
Click on any image for an enlargement.

Chip and I have been snake-bit for a very long time when it comes to getting decent weather for a serious trip. That all came to an end today. 80's, low humidity, nary a cloud in the sky.

I spent Saturday night at our campground in Plymouth, and it wasn't till I was down there, miles away from any Internet connection, that Chip asked me if I'd printed a map. Damn! (Ring... Ring...) "Hi, Nelson? I need a favor..." Nelson came through with the goods on Sunday and we knew where we were going. (Note: add "map" and "directions" to kayak packing list.) 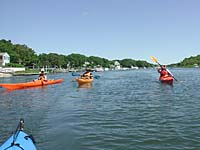 Ron, Chip and I met Nelson just off the exit in Plymouth, transferred his boat to my car and headed for the Cape. We found the launch without any trouble - great spot to launch. You drive your car to within a few feet of the water's edge, unload your gear, then drive a hundred yards to a good-sized parking lot.

And off we went. Ron and I were sporting our new sprayskirts, which were exactly like Nelson's (who had refused to paint his skirt pink to avoid confusion which I thought was very inconsiderate, but I let it slide due to his bailing me out on the map thing). 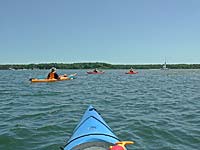 We headed south down Childs River, primarily a long skinny harbor filled with boats valued more than my house. We took a left on Seapit River and entered Waquoit Bay. As we rounded the turn to head south with Washburn Island on our right, there was an osprey nest on the corner. Standing room only. We guessed that the nest was full of old-ish osprey young.

We also ran into a little chop as we rounded that first corner and everyone took some water over the bow. Nice that the sprayskirt fulfilled its mission other than acting as a leg sauna.

We continued south, keeping ourselves at a comfortable distance to the shoreline. The bay was littered with power boats running at top speed, some pulling waterskiers, and others who obviously had considerably more beer than common sense (Darwin Award wannabees). 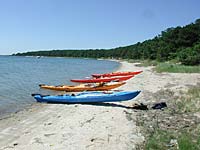 After we passed the major sandbar that juts out halfway down the island, we pulled on shore for our first break and checked out a few of the campsites. Holy mother of Neptune, what a nice spot!! Gorgeous sites with plenty of room, not right on top of one another, set up off the water to give a breathtaking view of the bay. We'll be coming back here with tents and sleeping bags.

We explored the area a little and continued on our way by kayak. As we neared the southernmost part of the island, we passed a guy who was standing chest-deep in the water. To me, it looked like he was working diligently to get the sand out of his bathing suit, but Nelson correctly guessed that he was digging clams (quohogs, actually).

Our plan was to check out the ocean, and if it was too scary, paddle west along a creek and portage to Eel Pond. We passed by the entrance to this creek to briefly check it out. Boring. We then headed over to the channel that leads to the ocean (and our ticket to manhood). 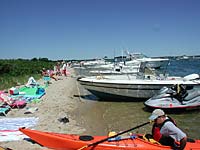 Just before we reached the mouth itself, we beached our kayaks so we could get a quick eyeball of the situation before passing the point of no return. The power boats were packed in here like sardines, but we had skinnier sardines and found room to land.

We chatted with one of the guys who had a power boat moored there. His opinion was that the ocean was very calm and that the bay was probably choppier than what we'd find out there. Chip was concerned with the guy's black helmet, hoarse breathing and constant muttering of "the dark side", but the ocean looked friendly enough, and we went for it.

The mouth itself was the most exciting part of the trip. The mixture of wakes from entering and exiting boats, along with the natural ocean waves made for an interesting surface on which to navigate. Once we rounded the horn and headed west toward the far shore, we only had to deal with the ocean swells (18", I'd guess), and it was a smooth trip to our second stopping point. 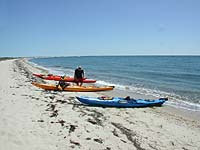 Landing was interesting. The waves were hardly huge, but they were big enough to dump water in all our boats between the time we pulled the skirts off and were able to get out of the boat and pull it up. Now we had a great view of Martha's Vinyard, deceptively close-looking.

From the top of the dunes behind us, we had a view of the "Plan B" creek that we didn't take, along with some pansy bed-wetting kayakers who were too afraid of the ocean (in other words, US, a few minutes ago).

Chip cooked up a pan of hot dogs for lunch, while Nelson went for a dip. After some lunch and an extended break, we continued. We turned north into Eel Pond and navigated our way back to the launch point. This was about 2.5 miles, and probably the longest leg of the trip, but unworthy of much discussion. Expensive houses... expensive boats... calm water. Homey don' do calm water no more.

We got the boats and gear back on the car, found a quiet spot in the shade, and talked about the day while Chip read us the stats from his GPS unit. All-in-all, this was one great trip, and we'll be back.