Photos by Pat Traynor and Nelson Pidgeon
Click on any image for an enlargement.

Saturday August 6th, the day dawned with a bit of high haze and a light but building breeze out of the northwest. Pat's car was road-able, Craig's hot water had been restored, and Nelson, as ever, was raring to go! We met at the Nickerson Beach put-in on the Squantum peninsula in Quincy on the agreed rendezvous time of 11:30 AM. The haze had burned off giving us clear skis for the planned trip down Dorchester Bay. We decided to pay a visit to the tidal pool on Thompson's Is. then proceed up the bay to the Western Way channel.

We departed the put-in at about 11:45 AM, Pat in his royal blue Wilderness Systems Tsunami, Nelson aboard his lava/mango P & H Cappella, and Craig atop his red/white Heritage Shearwater. As soon as we left the put-in an turned north east towards Thompson's we realized that the previous marine forecast for light northerly winds of 5 to 10 mph was a bit conservative. As we headed for Thompson's the wind was fairly steady at an estimated 10 from the northwest. It would increase and swing northerly, then northeasterly as the day progressed. We proceeded the mile plus to the tidal inlet on Thompson's without incident.

Unfortunately, the conditions at the inlet were not as challenging as Nelson was hoping for. The combination of tide flowing into the basin and wind in the same general direction added up to no standing waves at the inlet's mouth. Our pod of kayaks entered and took a brief look around the shallow pond. Craig spotted one great blue heron taking flight disturbed by our intrusion. Climbing structures used for part of the training regimen for the students at the Outward Bound school resident on the island were also seen.

As we were less than an hour from high tide, the incoming current had moderated enough to allow us to paddle out of the inlet against it. We then proceeded up Dorchester Bay towards the Western Way channel separating Thompson's from Spectacle Is. Along the way we passed the main dock at Thompson's where Outward Bound students were boarding two of the school's whale boats for a day of rowing and sailing lessons.

When we reached the Western Way and the tip of Thompson's, we landed on a beach overlooking the channel. About half a dozen tandem kayaks and two singles were pulled up on the beach. We didn't see any trace of the paddlers. 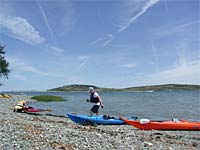 During our trip up Dorchester Bay the wind had increased to a steady 10 mph and was blowing a bit more from a northerly direction, meaning winds abeam for the paddle up along Thompson's. Wind waves were increasing to over a foot, and as we got further out into the harbor the remnants of ocean swells were in evidence. Once we had reconnoitered the situation we felt the situation demanded a visit to Spectacle Is. We re-boarded the kayaks and paddled out the third of a mile to the # 9 can marking the edge of the channel. On the way out we enjoyed some boat wakes taken head on. At the # 9 can we closed ranks and paddled briskly across the remaining tenth of mile to the beach.

We spent a bit of time trespassing on Spectacle, enjoying the panoramic vistas and climbing up to the highest point of the Is. which affords a 360° view of the harbor. On the way down we encountered another group of trespassers, on of whom indicated that Spectacle remains closed because of problems with the drainage system and the continued leeching of contaminants from the capped dump into the harbor.

During out sojourn on the Spectacle the winds had built to about 15 mph and were now blowing directly out of the north. We decided to circumnavigate Spectacle in a clock wise fashion and make our return down Sculpin Ledge Channel between Spectacle and Long Is. and Moon Head and Thompson's.

The trip around Spectacle provided the best "sea kayaking" conditions of the day. The swell was easily 2' and in a fairly confused state because of the ever present reflections off the rip rap surrounding Spectacle's shoreline. Wind waves and distant boat wakes added to the fun! Everybody got their bow deep in at least once, with some water coming over on occasion. I'm sure each of us executed a hip twitch or two for stability's sake. The distance around Spectacle charts out to about just a shade over 2 miles.

Once we completed the circumnavigation, we paused just off the main docks on Spectacle before crossing the Western Way channel and back to Thompson's. Everyone commented that the channel seemed a lot wider going back than it did coming out. The tide had turned and was fairly strong. We crossed without incident and proceeded down the slot between Thompson's and Moon Head. 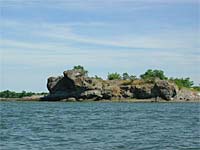 The wind continued to blow at about 15 mph but had continued to shift to the northeast placing it directly on our stern quarter for the return trip. This wind was kicking up a fairly confused state of wind waves - steepened no doubt by the swiftly flowing out going tide. After about a mile we pulled into the beach on Thompson's for a final stretch of the legs and another photo op. for Pat & Nelson before heading in the final mile around the sand spit and past Chapel Rock and Squaw Rock to the take-out at Nickerson Beach.

We were ashore by 4 PM. A retrace of our route on the chart indicates about 7 and 2/3 miles covered - actual distance paddled was probably closer to 8 miles. After the 'yaks were loaded we enjoyed a couple of after paddle beers and paddling related conversation at Craig's house in Quincy. All in all a nice day on the water with some excellent company!