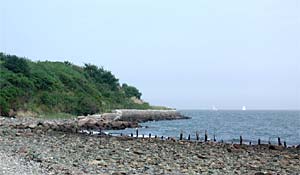 Photos by Nelson Pidgeon and Dave Keefer
Click on any image for an enlargement.

I arrived at Wollaston about 10:45 to find that Nelson and Todd had already arrived, and had begun unloading their gear. The tide was high, so the walk down the water was relatively short. While we were getting the boats ready, the beach manager stopped by, he was quite happy to see kayakers out on the beach. I asked him if there had been any closings recently, 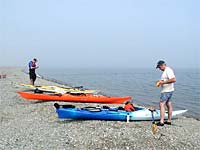 and he told us that the bacteria levels were very low, well within the acceptable range for bathing, so that was good. It looked like pea soup on Quincy Bay, you couldn't see Squantum, much less Hangmans or Peddocks when we first arrived. The fog appeared to be lifting, and we had a GPS, three charts and a couple compasses with us, so we decided to head out. The fog was already starting to burn off by the time we put in, and Hangman's and Peddocks were visible. We headed directly to Hangman's for our first stop. It was a about a 45 minute paddle to the island. We put in on the beach on the East side of the island. Hangman's was quite transformed since I had been there last, what had been a rocky and sandy desert was covered with weeds, lots of golden rod, queen ann's lace, and there were beach roses around the rocks. The rock gardens around the island were mostly covered by the high tide. There were the usual gulls and cormorants, 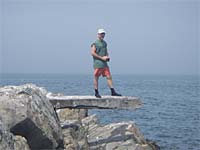 earlier in the year there had been oyster catchers as well, but they seem to have moved on. After stretching our legs and checking out the whole island, which doesn't take long, we put in and headed for Peddocks.

The water picked up a little between Hangman's and Peddocks, a harbor patrol boat stopped us at the channel to warn us not to stay in the channel two long, there had been an accident in the area recently. So we pretty much sprinted across the channel and came up on the Westhead, then paddled past Portugese Cove and the summer cottages, and put in at Perry's cove. We left the boats and walked over to Fort Andrews. A large part of the post is fenced off the buildings are boarded up. We were not able to see the Battleship Mural, 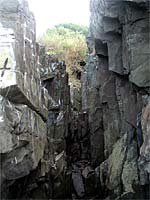 which was a bit of a disappointment as we had heard it was worth seeing. We stopped for lunch by the pier overlooking Hull Gut, which didn't really look as difficult as I had heard, although I can see why the current might be a little intense there, it is quite narrow.

After lunch we returned to the Perry Cove and headed out for Rainsford. The water was a bit rougher on that leg of the trip, there was a bit of chop. We made it to Rainsford and were welcomed by Tom Vecchione. Tom explained the Vecchione family had been living out on the island in the summers since they were children. There is a plaque up on the rocks that Tom has placed in his father's memory, as well as numerous other family members names painted on the rocks. He explained that all 11 children used to spend all summer wandering around Rainsford. The day we were there they were having a picnic and playing horseshoes on the Deer Island side of the Island. I have seen the Vecchiones on both my previous visits to Rainsford, they are a regular fixture out there. We found the foundation of the old hospital, and Tom showed us the marker carved into the rocks when the hospital was dedicated. It was an interesting tour. 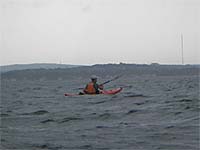 From Rainsford we decided to head back to Wollaston. We headed straight back, crossing the channel again about half way between the bridge and Hangman's Island. There was some rough water, but it was calm once we were passed Hangmans. We put in by the ramp between Tony's and the Clam Box and loaded back up, feeling a little bit tired. The last leg was about 1 hour long. It was a great trip.

The stats off the GPS put us on the water for 3 hours and 38 minutes, with a couple hours on the islands, putting us back in Wollaston at 4:15. Our average moving speed was around 3.3 MPH, and the trip distance was 11 miles.