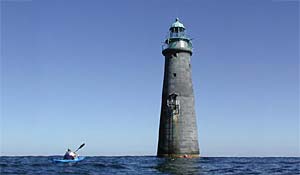 At last! Minot Light, the trip I've been aching to do finally became a reality and all I can say is, "This is what it's all about!" On Labor Day, Pat, Ron and I made plans to paddle out of Cohasset Harbor and visit Little Harbor up the coast before heading out to Minots Ledge Light. This was a great trip and completely lived up to my expectations. 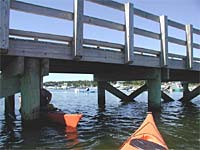 We all met at Pat's house around noon. I transferred my boat onto Pat's Car and we headed for Cohasset Harbor. The coastal weather report said 10-15 mph winds and 2 to 4 foot seas with Easterly swells and since most of our trips have been in relatively quiet seas we weren't 100% sure what to expect. Often times I've found the wind and seas to be gentler than predicted and the only excitement we find is off the wake of a passing boat. When we reached the put-in at Parker Ave in Cohasset the breeze appeared to be blowing as predicted.

We unloaded our boats and parked in the function hall parking lot on the hill behind the put-in (near the Harbormaster's Office). From what I'm told, parking is acceptable here if there isn't a function going on and it's just a short walk back to the put-in. 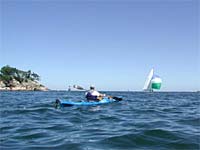 It didn't take long before we were geared up and were heading North past Bassing Beach. The skies were bright blue and we had a clear view of Minot Light straight ahead. The plan was to head East along the coast to check out Little Harbor before heading out to the lighthouse. By the time we had reached Windmill Point at the mouth of the harbor, the seas had begun to pick up and we were punching through 2 and 3 foot swells. When we turned East towards Little Harbor the swells were on our beam making the trip a bit more interesting. I had heard that Little Harbor might be hard to see from the ocean so we were concentrating on every nook and cranny on the rocky shoreline to be sure that we wouldn't miss it. I had a chart of the area with me but things don't always look the same in real life as they do on the chart. I was pretty sure it was just around the next point when my thoughts were confirmed upon seeing the small bridge that crosses over the inlet to Little Harbor in the distance to my left. 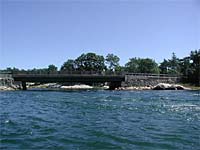 We had heard lots of stories about the current running in and out of Little Harbor and since none of us had been here before we timed our entry into the harbor (thanks to the numerous observations by Pat over a cup of coffee) to arrive just after high tide when the flow was at a minimum. When we reached the current it was still moving at a pretty good clip and gave us a nice ride into the harbor. Two kayaks were in the eddy on the other side and to my surprise one of them was fellow Turkey Finn McCool (Mike) and his brother (Kevin or David, I'm terrible with names, sorry). We said hello and I introduced Mike to Pat and Ron. I took another run against the current to see what would happen and found myself instantly redirected in a direction I didn't want to go in and there was nothing I could really do about it. It's times like this that having someone with you who knows this area well would come in real handy. I made another run at the moving water, got tossed around a little more then caught up with the others. 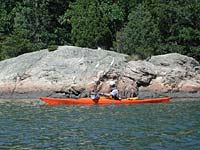 We paddled around the perimeter of Little Harbor taking pictures of it's rocky outcrops and egret filled trees, but after the swells and current we had just experienced, this all felt a bit benign (beautiful but benign). Ron and I both felt the need to eat something so we all took a break at the small gravel beach by the Cemetery and were soon joined by Finn, his brother and two other paddlers who thought there was a party going on. Pat, being the quick witted individual that he is, looked at the Cemetery and said, "Hey, we can tell everyone we paddled out of Cohasset and ended up at The Graves.", which gave us all a chuckle. 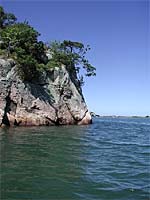 By now the tide had turned and so we made our way out of Little Harbor. We sort of knew what to expect when riding the current into a quiet harbor but we weren't completely sure what to expect riding the current out into the open ocean and 2 - 4 foot swells, but we soon found out. The outgoing current wanted to push us around but it was manageable... then we met the waves. One wave covered me from the bow to the back of the cockpit, a little scary but VERY exciting and I never once felt like I was going over. Against my better judgement I took my eyes off the incoming waves to take a glance back to see how Pat and Ron were doing. Both were doing great but I couldn't tell if the shining white I saw on their faces was from their grinning teeth or their bulging eyes. Actually, it wasn't all that bad but it's fun to make it sound that way.

We were now past the worst of it and sitting there quietly for a minute while the swells picked us up and layed us back down again. On our way out to Little Harbor we had been discussing whether the trip out to Minot Light in these conditions was something we were all ready, and I'm sure that's what we were all thinking about now. Then Pat looked over at me and said, "I'll do what everyone else wants to do." So, with fingers crossed, I turned and looked at Ron and said, "You wanna go?" He shook his head in the affirmative. I tried to contain my excitement as we turned our bows towards Minots Ledge and paddled into the waves. 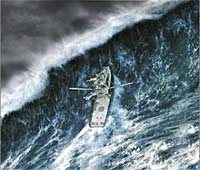 Note from Pat:
On the trip to the lighthouse, none of us had any desire to take our hands off our paddles to dig out a camera, so I'm including this artist's rendering of the experience.

I had just recently bought an orienteering compass and as a test, had plotted our course from the mouth of the Little Harbor inlet to Minot Light. The bearing I came up with was 60 degrees magnetic and as we paddled toward our destination I could see that it was dead on. On the way the three of us went back and forth over what we thought the size of the swells actually were. But the further we went, the bigger they got and we all came to agree.... they were bigger than we've ever seen. We may have even seen a six footer or two by the time we reached the light. One thing was for sure, they were a blast to paddle in.

About half way out, Ron pointed out an area of standing waves to his left, probably caused by another rocky ledge. We saw some to our right as well. As we paddled closer, Minot's Light loomed large in front of us. It wasn't on an island and we couldn't see any rocks around its base. It looked like it came right from the ocean floor. It was awesome! I needed to take pictures of this but was worried about losing my camera, and with these swells...... But there was no way I could leave here without pictures. Pat agreed and said he would hang back a bit and take a couple with us in the foreground. I paddled closer and was in awe of this massive tower of granite with a perfectly blue sky as it's backdrop.

Minot Light has been nick named the "I Love You" light. From what I've heard the legend says that in the late 1800s a lonely lighthouse keeper, longing to be with his family on the mainland, would flash 1-4-3 (I-LOVE-YOU) to let them know he was thinking of them. The light still flashes 1-4-3 to this day but we never saw it flash during our visit. Maybe it only comes on at night now but I know I've seen it flashing in the past. 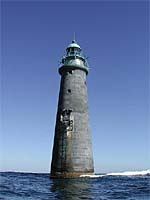 I reached around and opened my day hatch and carefully pulled out my camera. It was hard to keep the camera steady with all the swells and I was afraid the pictures would not come out clear. To my surprise they came out pretty well and I'm glad now that I took the chance. I switched to video mode and took a couple of videos which came out well enough to give you the feel of being out there with us. Before we left I paddled up to the base of the light where the swell action was much more unpredictable. A bit earlier Ron almost went vertical as a swell passed under him. Wish I had got a picture of that.

Well we'd had our fun and it was time to head back. We turned our boat towards Scituate Neck, which is on the West side of Cohasset Harbor and began the trip back. With the seas coming from behind us now we didn't feel as in contol as we did on the way out but we made the best of it and got a chance to ride a few swells on the way in. Once we reached Strawberry Point the seas began to mellow. While Pat and Ron were checking out what was happening at Scituate Neck, I spotted a small opening in a cluster of rocks to my right. It was a bit shallow but a good swell pushed me through and we found an area to get out and stretch our legs. According to the chart we were at Hog Rocks. We got out, had a snack and some water and took a few more pictures. While we were there the tide receded a bit more forcing us to make a 4 foot portage to the other side of Hog Rocks before making our way on the final leg of the trip. 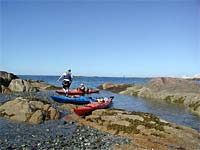 It was around 4:30 p.m. when we reached the put-in at Parker Ave. We got our cars (which were still there and ticketless) and loaded up the boats before heading back to Pat's house for a PPR (Post Paddle Refreshment). Ron couldn't stay but stopped to check the straps on his boat then headed on his way home.

Pat and I enjoyed a beer on the tailgate of my truck while reliving the day and talking about future destinations. Every trip I've been on lately seems to be better than the last, and it's exciting to know that there are still so many places left to visit. I can't wait to see where we'll be headed next???