Since my trip to Salem Sound last year I've been itching to do more paddling on the North Shore but never made it back, so when Adam posted a trip to Misery Island I was all over it. Steve and Jordan signed on as well and we were all pumped for an early season paddle.

The weather predictions for Saturday varied a bit depending on what website you were looking at. Winds were predicted at 7-11 mph with seas 1-2 ft on one site and 10-15 mph with 20 mph gusts and seas 2-3 ft on another. Obviously we were hoping for the former but found it to be all the latter. 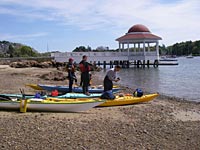 Steve and I drove together and met Jordan in Braintree for the caravan to Tuck's Point in Manchester. The roads were clear and we made great time. If you've never been before, Manchester is absolutely beautiful. The houses, landscapes and manicured lawns were unbelievable. The place reeked of money. We arrived at Tuck's Point to find the small beach next to the gazebo a perfect place to launch. Numerous young families were out enjoying the morning air, playing on the swing set and even picking up litter on the beach.

While we were unloading our boats and gear Adam arrived with Bob Budd a familiar voice on the NSPN forum. Both are very familiar with the area and would be our tour guides for the day. Once we were all geared up Adam reviewed the chart with the rest of us and did a quick check to make sure we had everything we needed. Ironically, our vhf instructor did not bring his vhf with him but his workshop was so inspiring that there were plenty of radios to go around. We did have a schedule to keep and wasted no time in getting on the water. 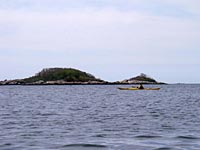 We made our way east through the Ram Islands then headed south towards House Island. The winds were coming from the NE and we had quartering to beam seas averaging 2 feet the whole way out. Having been out only a few times this season and knowing the water temps were right around 50 degrees none of us were too keen on finding out what 50 degrees felt like so needless to say we were paying close attention. We passed Whaleback Ledge and headed towards the East side of Baker's Island. Adam would occasionally point out caution areas and other points of interest that would come in handy if paddling this area during the busy summer months. I was being cautious but feeling relatively comfortable. As we reached midway between House and Baker's the waves steepened a bit due to the increased fetch and I saw Steve nearly go over. "We'll have none of that!" I yelled at him. We were now passing Baker's and getting some refracted waves from the island to go along with the increased swells. I saw a nice swell coming towards me over my left shoulder and leaned into it a bit as it passed. As I was returning to an upright position a second swell came right behind it and caught me off balance. The next thing I know I'm staring up at the ocean's blurry surface. I thought about positioning my paddle for a roll but I was disoriented from lack of practice and decided to wet exit instead. Damn! Why didn't I go to a few more of those winter pool sessions? I felt the chilled water slowly seeping into my wetsuit but thankfully it wasn't too shocking and actually felt a little refreshing. No ice cream head either and I can't believe I never lost my hat.

I broke the surface to find Adam right there ready to assist and I was back in my boat in under a minute. With less than a quart of water in the cockpit there was no need for the bilge pump. Adam checked in with me to make sure I was doing alright and we continued on. A little embarrassed by the experience but I was much cooler now and looking forward to the next challenge... sort of. 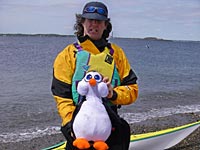 We continued past Bakers Island and headed for the lee side of South Gooseberry Island. Steve brought my attention to two brightly colored orange objects up on the beach. I figured it was part of an old lobster trap or something and forgot about it. I wasn't sure if we were getting out but Adam landed so we all followed suit. We soon discovered that the orange objects were actually the feet of a small penguin. You heard me right, a penguin which Adam had now befriended. I was unaware that penguins came this far south but the area is so beautiful, how could they resist. We pulled our boats up on the beach while Bob did some roll practice, Greenland style... I probably should have joined him. 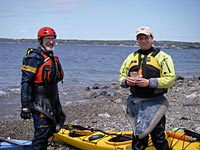 Steve had a prior commitment and had to be back on the South Shore by 5:00 PM so after a quick snack we planned the next leg of our journey. Not knowing how much we could do in the time we had left I suggested to Adam that he show us the most interesting area before we left, but thinking about that later I realized that "interesting" can mean different things to different people. We followed as he headed east toward the open ocean and we could see breaking water in the distance. He did say something about the Breakers, so maybe this was them? The closer we got, the bigger they seemed to get. I felt my paddle cadence slow and was wondering if I really wanted to keep going, one dip was enough for me today. Steve pulled ahead following Adam and made his way through the turbulent surf while Jordan and Bob came up from behind. I decided to give it a go and paddled up and over a couple of large swells. This wasn't too bad, I thought until I realize there was no way I was going over then next one which was now blocking my view with its foamy white head already starting to curl. I pierced it with my bow as it broke in my face and washed over the deck. For a quick second I felt like I was going over but I managed to stay upright and paddled out of harms way. Jordan and Bob followed while Adam and Steve took another crack at it, this time Steve got blasted by a wave. Damn, I wish the water was warmer so we could actually enjoy this a little more, I thought to myself. I hung out to one side and watched the others go through before realizing we needed to head south putting these big bastards on my beam again. But we forged on to the next bit of fun in the form of two submerged boulders about 20 yards or so apart. We could go far around to the left or straight through the middle. Adam suggested we stay back and watch what was going on for a while before making a decision. The middle looked fairly tame and Jordan made the first move with me right behind him. On the other side we were rewarded with the sight of a small group of seals spread out around us, checking us out as much as we were checking them out. They were much lighter in color than the seals at Monomoy but looked very similar. We watched them while the others caught up then decided to head towards Misery. 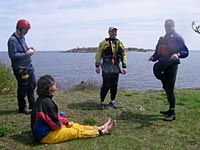 The paddle to Misery was comfortable and we made good time during the crossing. Bob had taken the sweep position for the entire trip and I have to say he is a much more patient sweeper than I'd ever be.

Steve, Jordan and I landed at Great Misery while Adam and Bob went over to Little Misery to look for mussels. From our vantage point it looked like Adam had decided to change into some more comfortable clothes so I guess they were planning to stay for a while. But the clock was ticking on our end and we decided it was time to head back. We hollered over to the others that we were taking off but they convinced us to come over to Little Misery for a panoramic view of the area we had just paddled and it was well worth the trip. A small clearing on a bluff was a perfect spot for lunch with a spectacular view of Baker's, Eagle and the Gooseberries. Unfortunately we had already had our lunch at Great Misery and were short on time. We reminisced the day's paddle, took a few pictures and said our thanks to Adam and Bob before heading back to Tuck's Point.

We paddled clockwise around Great Misery for a better view of the island passing by the ruins of an old building that resembled a castle on the west side. Adam mentioned there used to be a casino on the island which may have been what this structure was.

We had more of a headwind on the way back but the paddling was considerably more relaxed than how this day started. A lighthouse on Smith Point which the chart denotes as an observation tower marks the entrance to Manchester Harbor and our put in. Our first order of business after getting our boats off the beach was to get out of this paddling gear and we wasted no time in getting it done. We loaded up the boats and were soon on our way back to Route 128 and the southern shores.

I learned a couple of things and had a couple more reinforced during this paddle that will always be with me. First, never assume what conditions will be like based on weather reports, use them as a guide only until you actually see the ocean with your own eyes and feel the wind on your face. Second, don't disregard what people tell you about dressing for the water temperature. Always be prepared. Third, practice your rescue skills as often as you can, for your own sake and for the others you're paddling with. And fourth, if something doesn't feel right, go with your gut and make the smart choice.

I believe there is a line or comfort zone many of us subconsciously navigate on. You're familiar with it and it makes you feel safe. For the most part you know what's on the other side but caution and instinct oftentimes keep you from venturing to close. For some I believe it's just a matter of taking that conscious but educated plunge, so to speak, into the unfamiliar to realize that you can begin to draw a whole new line and expand your comfort zone. Even though my "plunge" today was not conscious, the result was nowhere near catastrophic and made me realize that if I could have gotten past the apprehension and trusted myself, I could have made even more out of this outstanding day. You can practice a low brace all day long in a pond but you're not really going to know how to use it until you've blown it a few times. So go ahead and practice but make sure to get out there and blow it a few times too.

Thanks Adam and Bob for the guided tour and for your help and encouragement. I look forward to paddling with you again in this new world that is the North Shore. 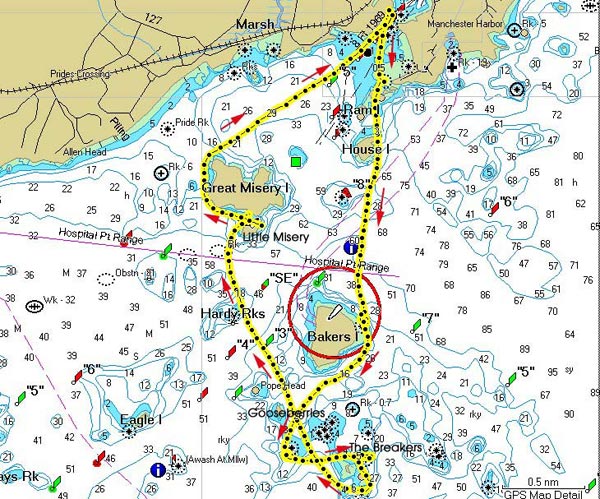