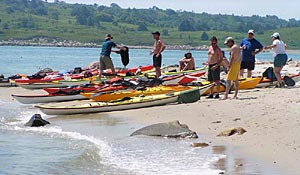 Photos by Ron, Nelson and Dave

The Woods Hole passage, when traversed at the wrong moment (bad weather or up to 6 knot tidal currents) can really ruin your day. Many of us have experienced hair raising paddles when the wind kicked up 5 foot waves, or the current swept us into areas we did not want to be; like upside down or in the path of the Newport Ferry. Those were the times that we privately pleaded with a higher power, "Please, oh please, get me out of this watery and wobbly debacle in one piece!" Crossing the Woods Hole channel should always be done in the company of experienced paddlers, with an eye on the weather and tides. You should feel personally confident in rough water and self-rescue before you take that first stroke to get from the mainland over to the Elizabeths. However, if planned right, Woods Hole and its environs can be a blast

On Saturday, July 14, we could not have asked for a better experience. Jordan planned a careful trip through the passage and out to the Weepeckets. The weather turned out to be spectacular (Linda planned that end of it) and there was something to do for everyone, either going the "beach bunny" or naturalist route, swimming and snorkeling, or playing in the currents. Although Adam, our fisherman, was hoping for a few bluefish tales to tell, it was a satisfying way to spend a summer day.

10 of us left Quissett Harbor around 9:30 am, hitting the outgoing tide on the Buzzards Bay side. Parking by the marina is limited, so getting there early is a must. Many of us car pooled. Joe, Chip, Nelson and Ron actually took one car and trailer-ed their four boats! (Good environmentalists!) Quisset is one of those quietly protected harbors with large glossy sloops, fishing vessels and little catboats moored in one of the most picturesque harbors in New England. The water is clear and warm, the beaches are sandy and public, and the estates just roll right down to the sea. We paddled out of the harbor with very little wind, headed out into the open bay and pointed our bows west to Penzance Point. We could see the Weepecket Islands, southwest, about 4 miles ahead.

The tides are odd around the Hole. The Eldridge Tide Chart has a great illustration of the ebbs and floods of the area and is very helpful when planning a trip in this area. Buzzards Bay' current will be going in one direction, while the Woods Hole channel will be going in another. The morning we left, high tide was at 8:23 AM., and the current was heading parallel with the bay (SW). As we turned around Penzance Point, the current shifted east. This worked in our favor as we crossed the channel over to Hadley Harbor nestled in the Elizabeth Islands. There was relatively little boat traffic for a Saturday in July, so we crossed easily, and stayed outside the narrow part of the channel by staying to the east of Timmy Point on Uncatatena Island. This part of the channel seems to have less intense current, and when hit at slack, as we did, it is relatively innocuous.

The Inner Harbor in Hadley Harbor is between Naushon Island and Uncatena Island. Bull Island is a small island in that harbor which is the only spot the public is allowed to land on. The Forbes family owns Naushon and the smaller surrounding Islands, and it is forbidden to land anywhere else. However, we slid into the Northwest gutter and briefly stopped for a swim and a stretch. This lovely little channel has to be hit before low tide, as it is not passable. Mark S. joined us at this point, after playing in the currents in Woods Hole. Nelson was trying out his nifty video rig, set up on his foredeck, taking actions shots everywhere. That activity was soon tempered as he ran out of memory and began lamenting the sway of the camera affixed to the unsteady rubber mount. I am sure he got off a few good blackmail shots of us, however, as we fell out of our boats, stripped off our spray skirts and made for the brush.

After the break, we paddled on to the Weepeckets less than a mile off of Naushon. A few of us circumnavigated the Island before we landed. It is a small Island, with a sandy beach on the north side. We were surprised by the National Geographic scene that awaited us on the South side. There must have been 1000 cormorants and seagulls roosting there, which explained the smell down wind. They were quite agitated when we rounded the bend and navigated in and around their roost. They swam or flew off with great squawking and indignation. It felt like a scene right out of Hitchcock. The noise, which was raucous, and the surrounding presence of the birds, above and around us, was nothing less than a swarm.

We landed on the sandy side of the island and ate lunch, napped, swam, snorkeled and went for walks. Some of the paddlers played in the rock gardens to the east of the island, although, at high tide there was little to see and not a lot of waves to play in. At a lower tide level, one can see multitudes of sea life and practice paddling skills around the boulders and crevices. Alas, for Adam, there was nary a nibble amongst the fish population. They just seemed to jump up and thumb their noses (gills?) at us. He ended up paddling out to Buzzards Bay in search of fish,but to no avail. I guess there was no fishing karma that day.

After the tide turned, Eileen and Mark G. headed straight back to Quisset, without the Hadley Harbor detour, in order to make a previously scheduled concert date. The rest of us scuttled over to Hadley's Inner Harbor and headed over to the East Gutter to play in the current. Many of us spent about an hour trying out our ferrying skills, or making a valiant attempt to paddle up the gutter to the other side of the bridge. Joe and Nelson almost made it. Nelson took the easier (and in my mind, more sensible) route after several paddling attempts, by getting out of his boat, hoofing over to the other side of the bridge, and body surfing his way through the current. The standing waves were mesmerizing and perhaps a little wiggy for those who were just getting used to their odd ways. Nelson, Jordan and Mark S. ended up in the brink and attempted combat rolls with some success. There were many willing volunteers prepared to fish them out of the water if necessary. 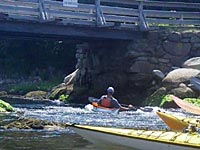 As the current settled down, and our sunburns began to kick in, we happily headed out of Hadley and paddled east across the channel towards Quisset. The wind had kicked up to a gentle following sea, and the current easily swept us back towards our put-in. The boat traffic had increased, but because our group was large, we could be seen easily. We traveled through the marked channel as a group and managed to find a moment when that danged steroid induced speed ferry was nowhere in sight. No problems. 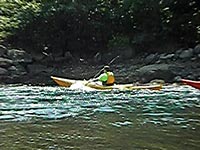 The remaining 9 paddlers arrived in Quisset around 3:30 and had traveled ~ 14 miles, about 2 more than the original route. As we packed up and chatted amongst ourselves, we agreed that it was a very satisfying day. We lost only one hat, people participated in the type of paddling they were comfortable with, and only a silly few had gotten sunburn where they forgot to apply sunscreen. We headed home for a dinner and a cold beverage