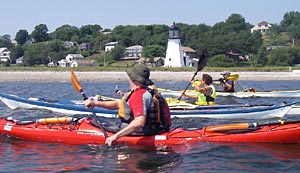 Prior to this trip most of my experiences on Naragansett Bay have either been on on the lower bay in places like Ft Adams or 3rd Beach. Other than that have been a couple of windsurf trips out of Fogland, or Wickford Harbor. My sole paddling on the bay was out of Island Park in Portsmouth.

When you look at a map of the bay Prudence Island is right in the middle of it. This provides a lot of opportunities in all directions.

I found a link to this page which says that Naragansett is one of the best day paddling locations. 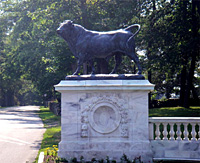 When I was looking at the route I found some info on Colt St park in Bristol which is a former estate turned into a park. It's a large park - we had several people calling to find where in the park we were meeting.

I picked out a route that crossed over from the mainland and circled around Prudence in a clockwise direction.

Saturday we arrived at the put in(after a few calls to confirm WHERE in the park we were meeting). Those of us following garmin directions had to RECALCULATE because of construction on the main route the gps provided. 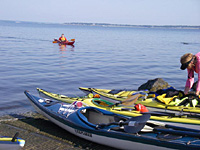 We arrived at the put in on a warm sunny day. Our group comprised of Barbara, Linda, Linda Burke, Diane, Rich, Norm, Nelson, Jordan, and myself. We weren't sure if Beanboy; who nobody had met was fictional or not. We unloaded and were on the water promptly at 9 am - using both launch ramps.

The water was flat this early and there was light traffic on the bay. We headed south along the shore of the park and saw several tents being setup for events. Linda mentioned that she was here once and there were 4 weddings going on. 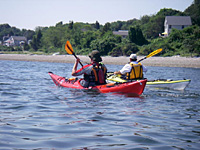 After a discussion on which direction to circle the island in(in the hope of getting a boost from wind & waves on the way home) we ended up following the original plan. We crossed the boat channel at the first set of markers.

We probably could have followed the shore a bit further south and crossed at the tip of Bristol Neck, but there was no traffic near us at the time.

Prudence is developed with lots of houses on about 1/2 the island. There is a Ferry from Bristol that brings cars to/from the island. We timed it just right to arrive at the ferry landing as the ferry pulled out. For future reference there is a general store at the landing there.

We pushed on southward to the Lighthouse. This was originally my planned lunch stop; but we were way ahead of schedule. Besides - this is more of a junior lighthouse like the one at Powder Point in Duxbury. 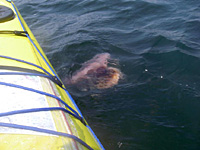 South of this the island changes from sandy shores to rocks. We did find another beach that had a landing area as well as matching sets of car seats to sit on; but somebody said that there was too much goose droppings for her taste!

So we paddled to the southern tip of the island. While approaching the pier Nelson noticed a large jellyfish in the water. This wasn't one of the small clear ones that I see in Hingham often, but a large bright red one. 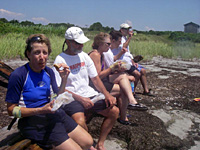 We also noticed more of them in the warm water as we approached the dock that juts out from the shore. We paddled between the pilings to the western side and pulled out on the beach there. We had lunch with views to the south of the Jamestown bridge and Aquidneck Island. And you could frequently hear the whistle of the sightseeing train the goes up and down the shore in Portsmouth and Newport. There were more jellyfish in the water so few people went for a swim. 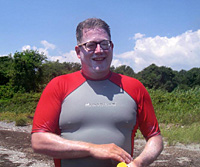 After providing comic relief with an application of sunscreen we launched into a nice tailwind as we headed back north up the western shore. As we got further up we had waves that were increasing in size to push us along. For me these were a good size to work with; while not too big. I saw several people catch some great rides after paddling to catch a wave.

We paused a bit to regroup after the group got spread out. As we got near the end of the island to gap between Prudence and Patience looked a bit different than what I was expecting. After watching a boat come thru we knew that we were near the northern tip and pulled ashore to take a swim break. With the wind and waves we had made excellent progress up the island. 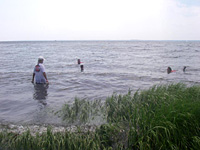 After a swim break we continued to the northern tip and took a few minutes to find our bearing to the park. This would be our longest crossing of the day at a little over 2 miles. There was more traffic on the bay now and the water had more interesting features. We lined up laterally to cross and sallied forth. Most of us stayed together but one of us(me of course) would stray off further - though still crossing in a line.

I was using one of the tents that had been going up in the morning at the park as an aiming point. At a couple of points in the crossing the waves were coming from several directions, but everyone handled it in style.

We returned to the launch, and could paddle up the dock rather than use the slippery boat ramp. And arriving at shore we were greeted by Beanboy!

He had arrived about 20 minutes after we launched and then paddled in the vicinity of the park.

I was driving up to the Deerfield river to camp and run Fife Brook the next day so I passed on any PPR in order to setup camp before dark.

It was a great trip and it was well worth the drive. Everyone seemed to have a great day, and the weather was perfect.

Because the bay warms up earlier and stays warmer in the fall a smart paddler might want to use the summer months to explore Cape Anne or other colder waters, and use the spring and fall to take advantage of the warm waters south of Cape Cod. 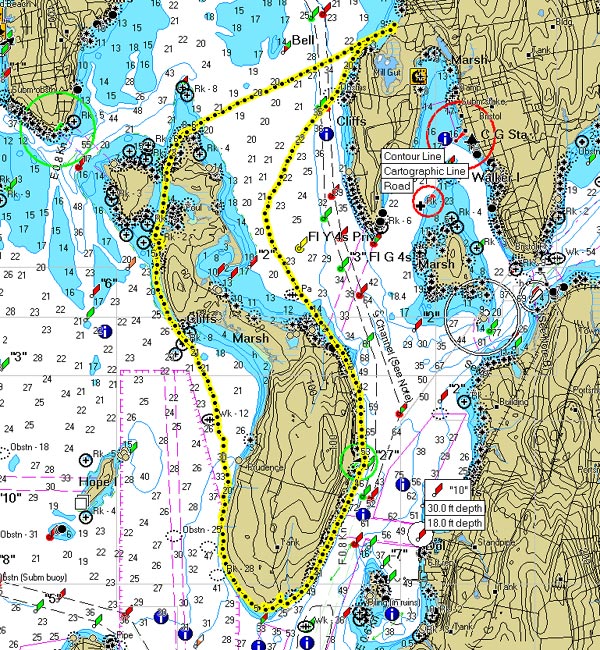