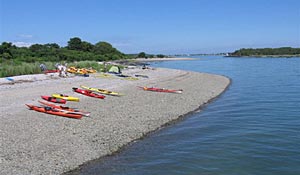 This trip reminded me of why I fell in love with kayaking in the first place. Being able to go places not everyone can get to, exploring historical sites or jungle like trails. Then, getting back in the boat and negotiating the harbor chop or viewing the clouds in the glass topped water. We had all of this on Saturday.

I got to the put in around 8:20 and met Todd in the parking lot. It was pretty full for this time of day. Later we would find out that the yacht club had a family day or something to that effect. Norm, Ron and Mike showed up shortly after and we started to unload the gear. Craig then came rolling in and we were good to go. We met Lora as we were getting ready. She paddled up the back river on her sit on top for a sunrise paddle. We exchanged hellos and welcomed her to the group. Norm helped load her boat and we were on our way. Right on time. 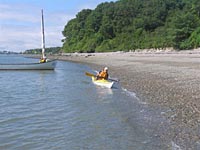 We left the Back River and headed towards Grape Island. There was a lot of activity on Grape. Outward bound had one of their boats moored off the island and kayaks were all over the place. They were preparing for an overnight on the island. We stayed in the boats and briefly spoke with the ranger. It was off to Peddocks to storm the fort. We launched 3 hours before low tide so we had a nice current to help us along. Since the tide was heading out we had to navigate around some sand spits we hadn't seen in the past. Luckily, the plastic boats were willing to mine sweep. 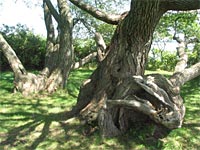 We ran into some wind and mild chop on the way over to add to the fun. As we passed by Sheep Island, Todd decided to play on the rocks and almost got himself lodged between a couple of them. Fortunately, he broke free and was able to join us. Thinking back, we should have stopped briefly on Sheep to be able to check it off the list. I guess we have a reason to get back there. We landed on the beach near the pier on Peddocks and pulled our boats up. 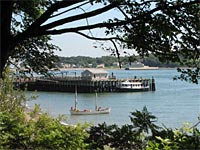 On the beach was another Outward Bound boat being anchored. A small group of kids were being handed tools to do some trail cleaning. Camping on Grape looked like the better gig. After a brief conversation with the ranger, (Mike was trying to secure her employment in the marketing industry) we picked up a couple of maps and headed off to the ruins. Craig is somewhat of an expert on many of these islands and provided us with an excellent tour of the island with added commentary. It was much better than negotiating the map and reading the pamphlets. Thanks Craig. It really is too bad this place has been left to rot by the powers that be. This could have been something really special if kept up. We spent about an hour exploring and hanging out on the island. After a quick lunch on the beach we decided to paddle through the gut and circumnavigate Peddocks and head back to Grape. 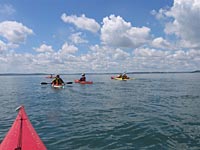 The gut was pretty benign when we passed through. We were pretty much at slack tide and there was minimal boat traffic. Coming up on Portuguese cove we started to see more boat traffic. They were mooring in the cove for the day. It is really nice in there. We will have to make that a stop next time. Coming around the final drumlin, the wind and chop picked up and there was much more boat traffic. I guess they finally woke up for the day. The paddle back to Grape was a little textured. We stopped at the edge of the channel to let 3 or 4 boats go by. Having the moment, we looked up at the puffy white clouds against the clear blue sky. It looked as though someone put a filter on the scene. Looking back at the windmill at the gut through Sheep and Peddocks was quite a site as well. It looked like a painting you would see in cottage on the cape. Since all the boats had gone by we decided to get our butts moving. 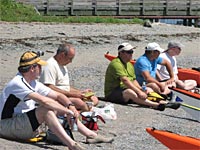 After paddling around another sandspit we landed on Grape this time to get a little walk in. Todd had to get back so he went on the launch site alone. The rest of us strolled through the maze of trails on the island. We lost Craig along the way but met up with him back by the pier. We ran into a couple of the Outward Bound kids on the trail. They were foraging for firewood and asked us not touch the wood they put in the path. They were drying it out. We thought we would have to bushwack through a pile of logs and branches. When we got to the pile, we had to chuckle. There were two twigs about 3 feet long and ¼ inch thick. Big blazes tonight! Grape Island is always good for a walk. It was a pretty busy island that day with all campsites reserved for the night. People had places to go so we headed back to Abigail Adams Park. 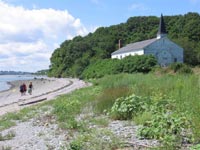 Once again we had the current going with us which made for an easy paddle back. As we rounded corner at Stoddard Neck, we saw a party going on at the launch with kids having kayak races and their parents swilling down a few beers. It turns out the yacht club had a little something for the kids. Luckily, they were finishing as we arrived so we had room to land and unload. After loading up the boats and some quick good byes, we headed home. Thanks guys for a great trip. I really needed that one.